- Doyle Wolfgang von Frankenstein (formally of the Misfits) has been in recently tracking and mixing for his second upcoming release. Sessions engineered by Nik Chinboukas.

- Leslie Odom Jr. has been in studio A tracking for his upcoming release.

- Sara Bareilles, tracking for the American Repertory Project, Waitress in studio A this past week. 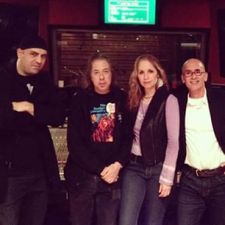 - Yamaha was in studio A, shooting promotional video for a new Yamaha guitar product with yamaha artists, Alex Skolnick and Mike Stern.

- Emilio Solla was recently in studio A producing Cristina Pato and her Migrations band for a upcoming release. Engineered by Nik Chinboukas and assisted by Yosimar Gomez.

- Acrassicauda has been in studio A recently recording their followup entitled Gilgamesh. Engineered and produced by Nik Chinboukas. Assisted by Yosimar Gomez.

- Alex Skolnick's Planetary Coalition: We are so proud to be a part of this extraordinary project! Over the years we have had the pleasure of Alex not only being our client, but becoming our dear friend! Congratulations Alex N Skolnick.